How the Anti-Meat Narrative is going to get us all Killed.

It has long been suggested that in order to save the world from climate change, famine, and global destruction, that the world over must reduce its meat consumption and instead adopt a Vegan diet, favoring the consumption of cereal crops for calories and protein. Although Veganism unequivocally represents a better alternative to Industrial Animal Production Model, the suggestion to reduce meat consumption in favor of cereal crops isn’t actually the best long-term solution for the environment, and may only prove to delay impending environmental crises.

Because of this, alternative methods which focus on ecological restoration—as opposed to short-sighted conservation— must be considered when other modalities offer viable possibilities of superior long-term results.  Unfortunately, when taking Ecological History, Critical Assessment, and Critical Comparison, and the concept of Survivability into account, it becomes clear that the suggestion to abstain from meat consumption has missed the mark. 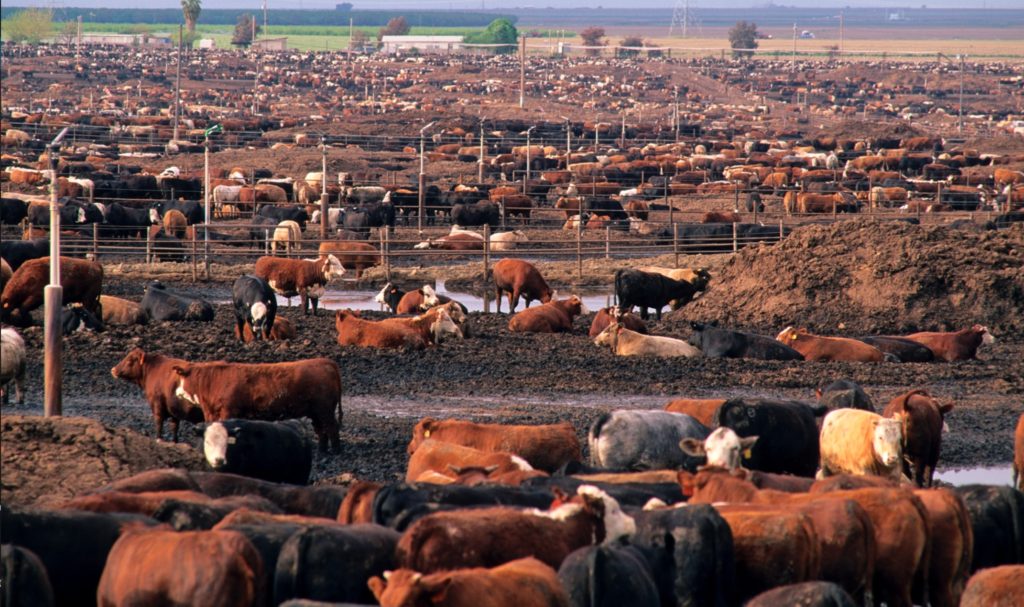 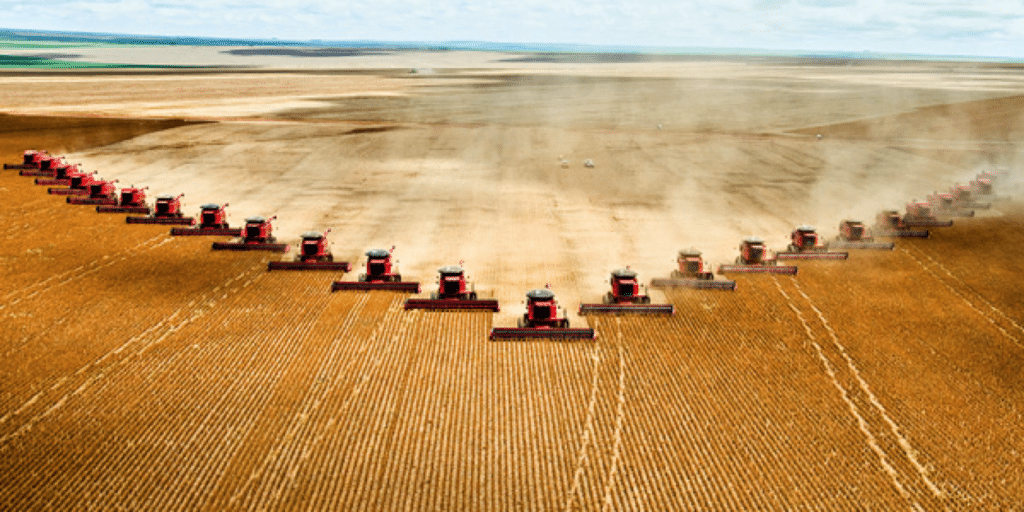 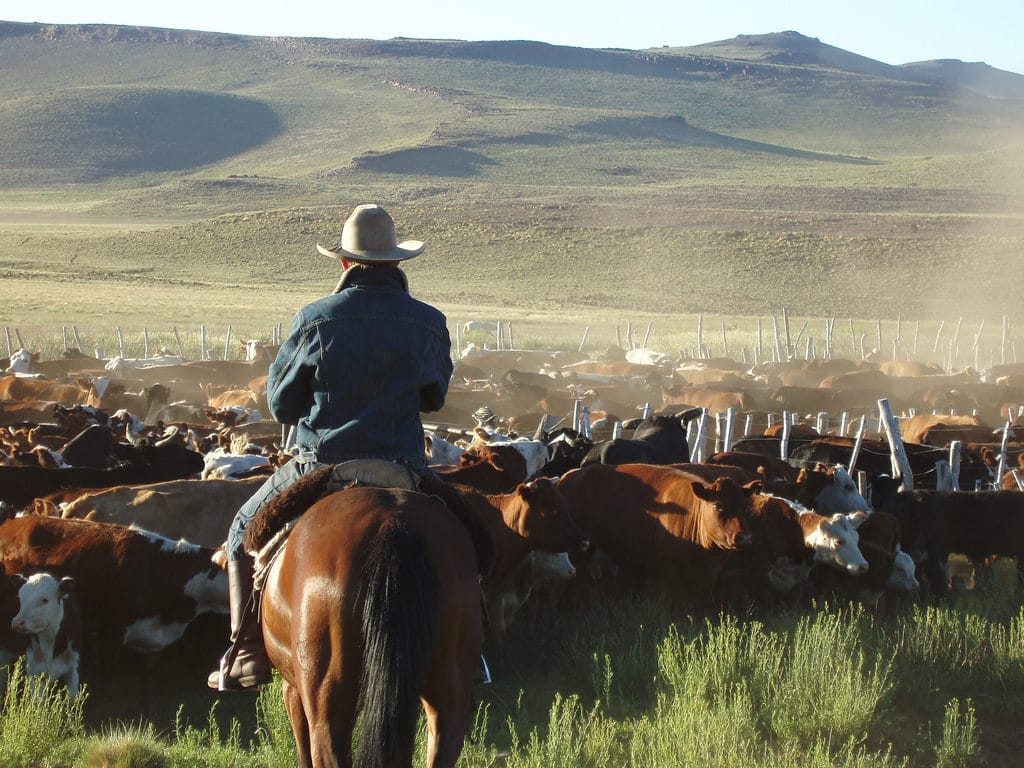 The chart above indicates whether specific factors have increased, remained the same, or decreased over the past 10 years, reflected by ‘+’, ‘=‘, or ‘–‘ with values of 10, 5, and -5 respectively. This portion of the Pendergrass Scoring Method of Sustainability is relatively similar to other sustainability diagrams, accounting only for Economic, Social, and Environmental Viability.

However, as Climate change is likely to cause increasingly extreme weather patterns making catastrophic weather more common, a more comprehensive examination of sustainability which includes survivability should be considered universally. In this portion of the Pendergrass Scoring Method of Sustainability pictured above, future projections are taken into account. Using this method of comparing the the Grain-based Monoculture System to the Feedlot Animal System it is apparent that the Grain-based system is better,  but will likely deteriorate in total sustainability score over time based on current weather projections. On the other hand, the Holistically Managed Animal Model represents a more economically, socially, and environmentally sustainable model, and is likely to either stay the same, or improve during hardship; signs of a resilient, sustainable, survivable, and even antifragile agricultural model. 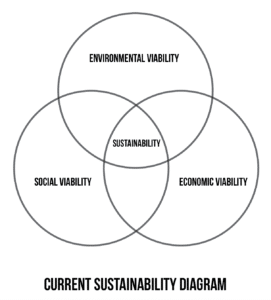 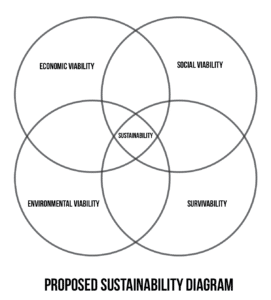 To promote a Holistically Managed Animal Production Model, and other viable animal-based models will require an extraordinary shift in narrative and paradigm, as well as changes in policy and current academic curriculae.  As conservationists and policymakers once dutifully decried the consumption of meat for the benefit of the world, it would be morally obligatory to change the narrative to highlight and promote the benefits and consumption of animal-based products from ecorestorative models which engender long-term environmental benefit.

Because Ecological History, Critical Assessment, Critical Comparisons, and Survivability are crucial for making environmental conclusions reflected in national and international policy, it is inconveivable that alternative methods of food production have not been widely considered, or comparatively assessed in a standardized scoring system. To only consider and compare the Feedlot Animal Models vs Grain-Based Agricultural Models is not only a false dichotomy, it’s also irresponsible and dangerous. The outcome has been the wholesale propagation of misinformation, oversimplification of animals’ role in the environment, and outright dismissal of alternative propositions for ecorestoration involving animal agriculture— diminishing the opportunity and resource focus to make animals an ally in the fight against global warming, processes of desertification, and global famine.

It behooves us to reconsider the current anti-meat rhetoric. It behooves us to look for viable options that offer long term solutions that do the least damage, and offer the most benefits, instead of focusing on short-term options. It behooves us to make adjustments to current ideologies when warranted, and to make standardized, critical comparisons when alternative agricultural methods are proposed.

There are many other animal-based modalities,  such as the ecorestorative concept of Rewilding. Rewilding endeavors to restore ecosystems using proxies for extant species, but  will call for a complete redefinition of what is considered to be a “native species”.  And although that may prove quite controversial, when considering its Ecological History, Critical Assessment, Critical Comparison, and Survivability—  it offers one of the most optimistic ecological solutions available, with perhaps even more promise than the Holistic Management model.

In short, to make environmental decisions as we have endeavored to do, we must look for long-term solutions, and we must make standardized assessments of viability which recognize the past, and account for the future, and we must change the narrative on meat consumption if we want to change the world.

Karen Pendergrass is an ENTP who is an enthusiast in a myriad of areas including Agricultural Sustainability, Food Politics, Applications of Bacteriotherapy, Autoimmunity, Color Theory, Hard Determinism, Social Engineering, and Rewilding.

Articles
Orthorexia is Bullshit : A lesson in Intellectual Laziness

Articles, Rants
Why I love, and Hate Whole30